2016 - July - NPS Centennial Quilt Show - Inspired by the National Parks --hosted by the NPS in Coulee Dam, WA. Several local quilters will also have quilts that they have made based on being inspired by the national parks. The NPSCentennialQuilts are 177 mostly art quilts representing the 59 parks. Each has a flora, fauna and landscape piece.

2016 - May - "Rondure" (a revised and simplified version of my original 1892 Rondure) and "Geese on the Run" released with Island Batik. Patterns available.

Schoolhouse session about my co-authored book and how shops can use it for their own classes -- International Quilt Market, Houston

You Can Quilt! Building Skills for Beginners published by AQS (autographed copies available at KQ)

AQS Quilt Weeks 2015 - nation wide will include a Red, White and Quilted exhibit. Two of the quilts I was asked to quilt as a representative of the 'modern quilter', "Birds in the Air" and "Double Nine Patch". Special Exhibit at the Paducah Quilt Museum at the end of the year.

We Can Do It! Skill Builder Sampler will be published by AQS in 2015. The book will include several example projects, including "Rosie's BOMb". The book will be co-authored by Leila Gardunia and Marlene Oddie. 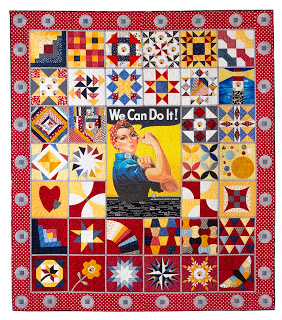 "Rosie's BOMb" is featured in the WSQ Quilt Show Article in the Spokesman Review Newspaper, Oct. 20, 2013.

"Dreamland" displayed at Fall Market in the Warm Company booth

Multiple client quilts win ribbons at Walla Walla Valley Quilt Festival, and one of my own!

2013 - April - Studio is now usable to long-arm quilt, but Grand Opening will wait until the weather cooperates to paint the outside of the building. Thank you to my clients who have been patiently waiting for their quilts.

2013 - January - March - Renovations of a studio in Grand Coulee continue.

"Rosie's BOMb" is given a Tri-Cities Quilt Member award by Friday Friends at their local show, "Outstanding in the Field" --Unique, Outstanding, Creative

2012 - May -- "Spinner" accepted into Pacific West Quilt Show to be held in Tacoma, WA in August.

Two years with a long-arm

Selected as featured 'blogger' to escort a group to the International Quilt Festival of Ireland in June 2012 - JOIN ME!!!

2011 - April Participated in the Supernova Quilt Along by Lee @ Freshly Pieced.

2011 - February - our new website is launched thanks to EvonneLeeDesigns.

2011 - January - Will be writing a column for the Country Register this year. First article comes out in the Feb-Mar issue and will be about taking traditional designs and extending them into the borders to create more interest and character. I chose to apply this concept with the AQS 2010 Mystery Quilt user designed borders.

Maywood Trunk show was on display at Fabric Depot in Portland, OR and included "Will You Accept This Rose?". Fun to see it hanging on their wall.

2010 - December – Busy with lots of customer quilts before Christmas. This has been a great first year!

2010 - November - Alerted to the fact that EESchenk used my "Will You Accept This Rose?" quilt to decorate their booth at the International Quilt Market in Houston, TX.

2010 - October - Stopped in at EESchenk's Trends event, Portland, OR and saw "Will You Accept This Rose?" quilt hanging with patterns for sale. You can get this pattern wholesale through EESchenk or retail from myself or Animas Quilts.

2010 - September - Walla Walla Valley Quilt Festival had several customer quilts on display that I had the privilege of quilting. Walla Walla University's U-Shop now carries most of my quilt patterns and the WWU and WWValley symbolic table trivets and pot holders. They are located on College Avenue just north of 4th St., College Place, WA.

2010 - August - Basket Block submitted to the 'Rose of Sharon' contest Nov. 2009 and selected as part of the book now available from Martingale & Co. "The Rose of Sharon Block Book". Purchase it directly from me to receive a signed-copy.

2010 - July - Block #47 "Inner-Quad Jewel" won VIEWER'S CHOICE. The block goes into a quilt I designed named "Will You Accept This Rose?". This is now a pattern available from Animas Quilts and features Jackie Robinson's "Roses" fabric line.

2010 - June - Basket Block submitted to the 'Rose of Sharon' contest Nov. 2009 was selected as part of the book which will be published in August. The block is also used in several chapters of the DVD to illustrate various techniques by Sharon Pederson. The Bird Block also submitted to the contest is included in the DVD PDF now available from Nine Patch Media.

2010-April - "Elephant's Play" featuring Shelburne Circus fabric line by Windham will be part of the manufacturers product catalogue at market.